Along with the increase in world population, the demand for food is also constantly increasing. Nowadays, grain is the main source of food, with corn, rice and wheat providing 60% of the total energy for the world's population. In addition, this is a cheap source of protein. However, plant proteins often lack essential amino acids. For example, cereal proteins often lack lysine and tryptophan, legume proteins often lack methionine (Fatou Ba, 2016). Therefore, in recent years studies have begun to focus on food sources derived from aquatic organisms. Algae living in aquatic environments often grow so fast but their nutritional needs are low. Protein from algae can also provide a complete range of essential amino acids (Garcia-Vaquero M. 2016). Thus, algae species will be a source of nutrition in general and protein in particular, along with the development of the world.

Gutweed- Enteromorpha sp. is green algae, naturally occurring with very large biomass in brackish water such as extensive ponds, natural canals, etc. of Mekong Delta. Gutweed usually appears in the rainy season when the salinity of water is reduced by about 2 - 25 ‰. Studies on biochemical components have found that brakish gutweed has a protein content of 9-25%, is rich in essential amino acids and has a protein digestibility of up to 98% (Nguyen Thi Ngoc Anh, 2014).

3. The main results of the project:
3.1. Determing the ratio of 4 groups of proteins

There are 4 groups of proteins, the ratio of these proteins is as follows: 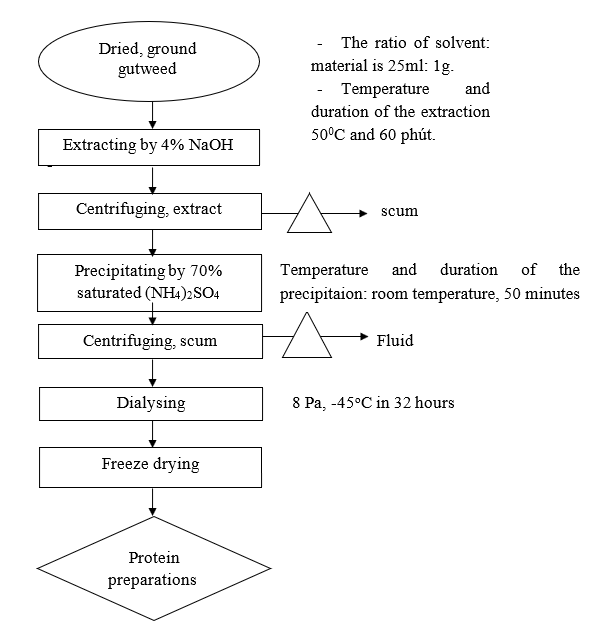 With this process, the extraction efficiency reaches 63.7%. 78% protein in the extract is precipitated, collected, dried into protein preparations. The protein content of this preparation is 48.3%.