VietNamNet Bridge – The Ministry of Education and Training has decided that the students with good physical conditions and intellectual development would be allowed to skip grades. The children in very difficult areas can begin going to school at the ages of 7-9. 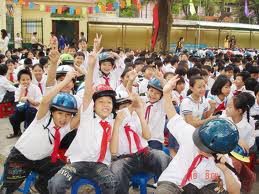 The formalities for applying to skip grades are really simple. Parents or sponsors of the students have to send applications to the schools, asking for the permission to skip grades.

After receiving the applications, headmasters of the schools set up a council to consider the issue. The council’s members are the representatives of the schools’ board of management and students’ parents committee, the teachers of the students, healthcare officers…

The final decision about whether to allow students to skip grades would be made by the headmasters of the schools after considering the surveys and reports to be submitted by the council.

Commenting about this, analysts said the regulation should have been set up earlier. In other countries like the Netherlands, France and the US, skipping grades is popular.

Students can skip grades or skip curriculums in some subjects. A student good at mathematics can begin learning the mathematics curriculum for fifth graders after he finishes third grade, skipping the fourth grade’s curriculum. Meanwhile, he would still follow the normal curriculums for other subjects.

Dr Nguyen Loc, Deputy Head of the Vietnam Education Science Institute, highly appreciated the decision by MOET, saying that this would be a significant move in the efforts to diversify the forms of educating talented students.

However, the decision, in the eyes of many other educators, would do more harm than good to the national education.

Vietnamese parents seem to put overly high hopes on their children’s learning capability. If children can skip grades, this would be a great pride of their parents. Therefore, it may happen that parents would force their children to learn too hard to be able to skip grades.

Meanwhile, general schools in Vietnam are suffering the “achievement disease” (i.e schools try to gain achievements at any costs, including making false reports). Therefore, the educators fear that the schools would apply loose regulations when allowing students to skip grades.

Vu Thu Huong, a lecturer of the Primary Education Faculty of the Hanoi University of Education, believes that the grade skipping would certainly have impacts on children.

Huong said it would not be a bad idea to allow the children with good physical and intellectual conditions to skip grades and no need to worry about their weak learning capability. However, the grade skipping would have influences on students’ feelings and psychology.

“Both my younger and elder sisters began going to school before their ages, and they were very good at general schools. However, they both did not feel at ease at school,” Huong said.

A child who is timid and uncommunicative would suffer serious psychological problems in case he has to bear a hard pressure at school.

Huong said she does not believe that students should begin going to school before their time, or skip grades.

“The children would have their childhood stolen, while they have the right to enjoy the interesting period,” she added.

Huong recalled the day when she was asked to go to school soon. “I felt that the class was not my right community. While my classmates could read and write, I could not. Therefore, right after the break time alarm rang, I ran out of the class and I did not return the next day,” she said.